So you’ve bravely volunteered to be the Dungeon Master for your group of players. Congratulations! Let’s get you ready for running your first-ever game of Dungeons & Dragons.

SPOILER ALERT: You’re going to have fun. You’ll be exhausted at the end of the gaming session, but you’ll have a blast.

In this article, I’ll talk about some “best practices” for preparing for your game, what to do right before the game starts, how to run the game, and what to do after the game is over. The D&D Dad has you covered, first-time DMs.

And just remember, you’ll only be a brand-new DM once. After that, you’re a veteran.

Preparing for the Game

Before you even invite friends or family over to play, you need to figure out what adventure will be your first adventure. In my research, it was almost unanimous to use the adventure in the D&D Starter Set: “The Lost Mine of Phandelver.” You might want to try your own “home-brewed” adventure set in the world you created, but that might be asking too much of yourself (unless you know that world and the adventure inside and out). 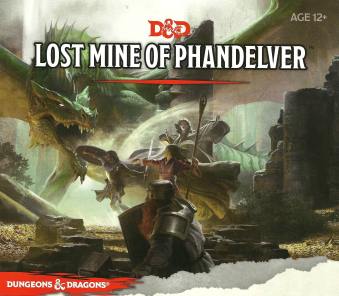 But I’d go with the Starter Set, just to make that first game less stressful. For tips on “Lost Mine”, check out my review and read our Adventure Report. “Lost Mine” has a classic feel to it, and you jump right into the fun with some goblins to fight! And you might even get to meet Droop…

So once you decide on the adventure, read it all the way through. Make notes as you go, and think about how the encounters and role-player interactions might unfold. Feel free to tweak things to make it easier for you — these adventures were designed to be changed on the fly instead of followed word-for-word.

Your next prep step is to decide how to handle creating characters. This activity could easily take up half or all of your gaming session, so you might want to have everyone create characters before the game day. One suggestion is to just use the pre-generated characters in the Starter Set.

We did NOT do that, but we did spend about 2 weeks reviewing the Players Handbook and talking about characters and making our own. If you have the time before game day, I suggest doing that. There’s something about rolling your own characters that makes them more meaningful and real.

And your last step of preparation before game day? Don’t overprep! Remind yourself that everyone who’s playing is going to be brand-new to the game as well, so they aren’t going to judge you and hate you forever. Be ready to improvise and act silly and make some incredible memories for your players in a completely new world.

Right Before the Game

Nervous? That’s fine. I actually think it’s good to get a little nervous before the game starts — it gives you adrenaline and energy to really start strong. If you hit the ground running with a strong start to your game, the rest of the pieces seem to fall into place.

Take about 15-30 minutes before the game to set up the table where you’ll be playing, and then sit down and review your adventure’s high points. Look at each room in the dungeon and think about the important items or creatures in that room, and envision how you might run that room. And then go back to the beginning and think of the best way to hook your players right away. Use the adrenaline from your nerves to get psyched for the game!

Also, I usually make a copy of the map of the dungeon or the area (or both) to keep behind my DM’s screen. I also prep everything else I might need for my DM’s area. (I talk all about the DM’s screen and DM’s kit in this blog entry.)

Finally, grab some snacks for the table (encourage players to bring the DM snacks, too!), and a big bottle of water for you. You’re going to be doing a lot of talking, so you’ll need it.

Take a deep breath, and call everyone to the table. It’s time to go on an adventure!

If this is your first time as DM, it’s most likely all the characters will be first level and brand new as well. For starters, I like to welcome everyone to the table, and before anyone draws a sword, I have the Player Characters get warmed up by telling us about their characters. The easiest setting to start in, even if it is a cliche, is a tavern or a bar.

You can ask players for three or four details, such as “Tell us why you chose the life of adventure, what you look like, and the coolest or worst thing you’ve ever done.” Start with the person who really got into creating his or her character, because he or she will be dying to tell everyone about the amazing wizard or rogue they made. You might even want to figure out, on the fly and as a group, how the different characters know each other. All these questions will get the characters thinking about their character’s motivations, and they’ll start fleshing out their characters in the process.

Then, hit them with the quest! Give them a meaningful reason to risk their lives — in the case of “Lost Mine,” one of the characters was close friends with Gundren Rockseeker, the main NPC of the adventure, who gives the characters a job, and then immediately goes missing! Some characters will jump into adventure just for the promise of gold or to right a wrong. You’ll get a feel for what fires up the players as you play more.

Next, simply follow what’s in the adventure, and let the players go to it! A lot of your job as DM is serving up cool settings and situations and challenges, and waiting for characters to respond to them. I always finish a description with: “What do you want to do?”

As the game rolls on, I keep a cheat sheet of all the key details about each character on my DM screen, including the mechanical stuff like Armor Class, Hit Points, Weapons and Damage, Spells, and so on. But I also keep a list of their weaknesses and strengths and backgrounds. If you can weave some of those character traits into the adventure for the players, they’ll be hooked!

Most of all, just go with the flow, and be okay with the fact that the players will do unexpected things! Instead of saying “You can’t do that,” say “You can try” or “Sure! Go for it!” (even if it’s something insane). Create a “Difficulty Class” (a number between 1 and 20) and have the character roll a d20 for a Skill related to the task they’re attempting, and let the dice resolve it for you. You’ll find that the more you get the players rolling dice, the more fun everyone will have.

Finally, always keep an eye on the energy level during a gaming session. Try to take a break every 45-60 minutes (especially if you have younger players at the table), and don’t play too long. You want folks to have fun and not feel like they’re slogging from room to room in your dungeon. Cut out the “boring” rooms if people are getting antsy. Have a battle on uneven terrain or throw in a funny NPC to liven things up.

And even if you don’t make it to the Boss Battle before the end of the session, try to end the session on a cliffhanger so the players will be craving MORE. They’ll be begging you to schedule the next session.

For even more tips, here’s a recent interview with a DM at D&D Beyond:

Of course, you’ll want to make sure everyone gets all their stuff back in the right place–I know our gaming table looks like a hurricane of dice, character sheets, tokens, pencils, markers, and maps by the end of a session (and I love that!).

While cleaning up, listen to what your players say about the game. Try not to ask leading questions like “Did you have fun?” Instead, listen. Maybe ask “What did you think?” or “What was your favorite part of the game?” Take some mental notes as to what worked or didn’t work.

After everyone has dispersed, I like to organize my notes and type up a short summary of the adventure for my “Adventure Reports.” I actually started adding these reports to the “Campaigns” page at D&D Beyond, as a backup. Not only is it great to re-read these notes later, but you can get a great sense of what kind of adventures your players (and you) like to have. Do you prefer solving puzzles and mysteries? Or do you like battling monsters and leveling up fast? Or a combination?

Finally, after the dust settles, you’ll probably start itching for the Next Adventure. If so, that means you’re doing it right! Rinse and repeat, and happy gaming!

3 thoughts on “D&D Dad: Your first time playing (as a Dungeon Master)”