Spoiler Alert! Don’t read this report if you haven’t played The Secret of Skyhold Tower! 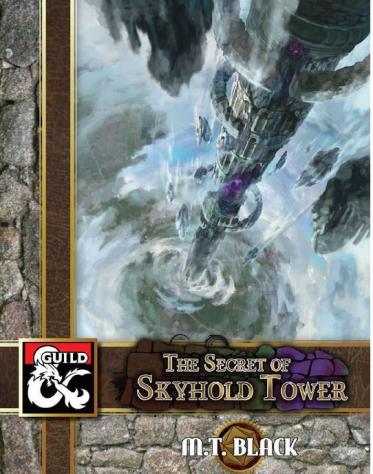 The “Phandelvers” (or so I’m calling them!) finally move away from the “Starter Set” neighborhood of Phandalin and Thundertree and end up getting tasked with saving the city of Neverwinter from certain disaster in this DMs Guild one-shot from M.T. Black!

In the smoking ruins of Thundertree, the druid Reidoth begs the party to locate the Crystal Ball of Farseeing for him so he can help protect the party’s newly save town of Phandalin. He know they can find info in the city of Neverwinter, just a days’ ride away. He promises rewards for the Crystal Ball, and of course the party agrees. They also agree to drop off the recaptured Glasstaff with the Lords Alliance in the city. All in a day’s work…

The next day at the Drfitwood Tavern, Emally immediately starts talking to strangers for information, while Darius chugs WAY too much milk at the bar. Emally buys a windup automaton from a gnome she’s talking to, and right when Emally hears the words “Hellmaw Island,” a huge tumult erupts in the streets. Zax and Eileria peek outside to see everyone staring up at the sky in shock: a 13-story tower is slowly falling towards the city!

Before Darius can grab another drink, the party is pressed into service by the Steward of Neverwinter, and they must escort the genius (and grumpy!) gnome mechanic Gimble Clickcrank UP INTO THE TOWER to figure out how to stop it from devastating the city. They peek into Gimble’s telescope and find themselves on a cloud outside the slowly descending Skyhold Tower.

After Ellaria grills Gimble and decides against climbing up the outside of the tower, the party goes inside, where they soon find the animated portrait of the wizard, Frander Skyhold. Emally straps the chatty portrait on her chest like a Baby Bjorn, and the wizard gives the party half-useful, half-meaningless advice along the journey upwards, mentioning something about his most recent apprentice, who was named Tobi.

The party is nearly overcome by steam mephits, which keep reproducing from the steam coming out of a busted pipe. Luckily, the party provides cover for Gimble so he can sneak into a side room and turn off the water providing the steam, and the party defeats the mephits with a fireball (Zax) and a hail of thorns (Ellaria).

On the next floor, Ellaria shows off her arcana skills (rolled a 20!) by deciphering the notes left by Frander and explaining them to Gimble, and he’s even more pumped up to get to the top. Ellaria casts Pass without a Trace so the party can slip by a nest of griffons in the ruined tower, and they rush through the next few floors without incident. At least until the Lords Alliance in Neverwinter starts using a trebuchet to launch huge boulders at the tower to try to knock it off course. Luckily, their aim is a bit off, and it only deals a glancing blow to the falling tower.

The party rushes up the “cloud stairs” (well, everyone but Darius, who falls a good 20 feet when the cloud stairs go away for a few moments), and they encounter Frander’s former apprentice Tobi, who has changed quite a bit. Frander claims Tobi volunteered for his elemental experiments long ago, and Frander tried to fuse Tobi with the four elemental planes. It didn’t really work, and Tobi has been drifting ever since. He needs the life force of another human to maintain his own form (and keep the tower afloat). But Gimble has other ideas. He and Ellaria sneak off to the control room to close the elemental rife Frander and Tobi opened, and Emally, Zax, Darius, and Ellaria’s pseudodragon Violet B battle Tobi. The rift is closed, Tobi is defeated, and the party seems safe.

Then an explosion rocks the top of the tower as the rift closes for good, and the tower careens out of control. Everyone helps Gimble “drive” the tower away from the city and into the shallows of the Trackless Sea, where it (more or less) gently touches down without damaging a single soul. The party swims to shore and are met by cheering crowds and the Steward of Neverwinter, who’s carrying a huge bag of gold. Mission accomplished.

1 thought on “D&D Dad: The Secret of Skyhold Tower (our Adventure Report)”