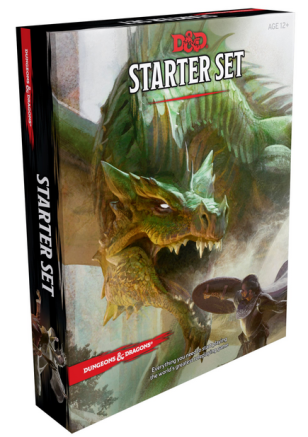 As part of this blog series, I wanted to do brief reviews of the different Dungeons & Dragons adventure we’ve played. We’re focusing on 5th edition D&D only, by the way.

TIP: For each adventure we play, I write a short recap that’s FULL of spoilers. If you’re a DM, check out the Lost Mine Adventure Report.

With these reviews I want to do more than just give a thumbs-up or thumbs-down. I want to give my opinion on what I liked, of course, but also give you tips if you’re a new Dungeon Master and trying out these adventures. I want to make sure you start playing with all the tools and knowledge you need to make it a blast for everyone at the table. Even if it’s your first time as DM!

That said, the adventure that comes with the D&D Starter set, “The Lost Mine of Phandelver,” is really, really good. Let’s break it on down…

But first, a quick tangent about D&D adventures

After you’ve played an adventure, any time you look back on that adventure, it’ll be like looking at an old scrapbook (or for you youngsters, some photos on your Instagram account). You’ll feel like the places you visited–from small town of Phandalin to the secret goblin hideout to Wave Echo Cave–are places you’ve actually walked through yourself.

And the non-player characters (NPCs) you meet, from Sildar to Droop to Gundren to the evil Iarno Albrek, are going to resonate in your memory like old friends and frenemies. It’s a lot a fun.

Overview of the Adventure

So let’s get to the adventure itself. It’s broken up into at least four different areas, and possibly six or seven areas if your party takes on all the various side-quests. That’s not bad for an adventure that runs about 50 pages (not counting the appendices).

The adventure is for level 1 characters, and you can expect them to level up to 4th or 5th level when the adventure is done. It takes place in the world of the Forgotten Realms, where all of the big adventures (the hardcover books published by Wizards of the Coast) take place for 5th edition (aka “5e”).

A side note: Because there were only three players (Mitch, Drew, and Elizabeth), I ran a character as well while being the DM. Not recommended, but it worked!

You can start in a tavern (the traditional, almost cliched way to start a D&D adventure) in Neverwinter, or you can jump right on the road to Phandalin. One of the cool aspects of this adventure is that you can do a lot of customizing to fit your players (something a good DM shoul always try to do), but they give you tools for all your options. Your party will discover trouble outside Phandalin, as well as in the town itself.

The first “dungeon” is actually a cave, and it’s a nice introduction to exploring a hazardous lair for new players. There are only eight locations in the cave, so you can definitely finish it in one session.

That said, the whole adventure will probably take 7-10 gaming sessions to complete.

In addition to the goblin cave, there’s also an entire wide-open town to explore (you might hear this called a “sandbox” adventure, where you wander through town instead of going from one dungeon hallway to the next), an underground hideout, a ruined castle, and the big dungeon crawl for Wave Echo Cave (20 locations!).

You also have a couple “bosses” to battle in each location, which makes it satisfying when players complete each location. It also helps characters level up in a pretty consistent manner.

The adventure is well-written, with some nice mysteries to solve, and a lot of memorable NPCs to talk to. And Phandalin is a nifty little town with an interesting history, and characters might choose to use Phandalin as their base for future adventures in the  Realms.

Also, the maps by Mike Schley are pretty enough to frame!

Tips for Running the Adventure

I had trouble early on remembering the goal of the quest, or the “adventure hook” that gets the characters psyched up to resolve the adventure, risking life and limb along the way. My advice is to really play up the character of Gundren Rockseeker, and make him either a close friend of one of your Player Characters or a relative if one of your party is a dwarf. That tight relationship will ensure that your party will not only find him, but also help him get revenge and retake his lost mine.

Also, I recommend you read and review the tips in the book for the various NPCs like Gundren, Sildar, Droop the goblin(!), and all the folks from Phandalin. I put their basic information on an index card, one card per NPC, to help me remember their key character traits. Here’s another free tip — use funny accents and voices for these NPCs. Ham it up, because everyone loves it, especially if you’re playing with kids!

I really wanted to get the party to the ruined town of Thundertree after they completed the main quest, but that part of the adventure felt a bit… underwritten. I found some nice tips here and here to spice up that section, but it still felt a bit forced. The good news is that I think Reidoth the Druid from Thundertree is going to function as a sort of “patron” to our party, setting them out on quests so he can help rebuild Thundertree and also protect the folks of Phandalin.

Finally, feel free to omit some of the rooms in each of the dungeons, castles, and hideouts to speed up the game. If the game feels like a bit of a slog, jump ahead to the rooms that have the key items, NPCs, or monsters that advance the story. I had trouble doing this at first, because I’m sort of a “completist,” but hitting every single room in Wave Echo Cave isn’t the point of the game. The point is to have fun telling the story of the Black Spider who’s trying to take over Wave Echo Cave!

I’ll always have a soft spot in my heart for tiny Phandalin. Even those Cragmaw goblins make me smile when I think of them. And Droop??? Forget about it. One of my favorite NPCs, right away. I even had him come back later when the party traveled to Thundertree so he could help save the day.

Other than some of the challenges I faced with the more open-ended “sandbox” aspects of the town of Phandalin, and then trying to continue onto Thundertree with my own ideas mixed with suggestions from more experienced DMs, I really had no major issues with this adventure. It was tough at first, just because I was a DM for the first time EVER, but we had a blast once we got rolling.

My only other suggestion would be this: if you’re looking for an adventure to run for your first time as a DM, you might want to look for a “one-shot” adventure from the DMs Guild to run first. A one-shot is a short adventure that you can complete in 3-4 hours. With a one-shot you can jump right into the action, keep it simple, and wrap things up, all in one session.

And then you can hop onto an oxcart from Neverwinter to Phandalin for The Lost Mine of Phandelver!

NOTE: All of my reviews won’t be THIS LONG, but this first adventure is special to me, because it enabled me to play my first actual game of Dungeons and Dragons. Also, getting through the entire adventure took us TEN sessions. Happy gaming!

4 thoughts on “D&D Dad: The Lost Mine of Phandelver (review)”