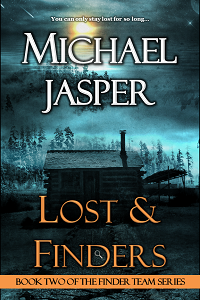 With just a little over three weeks(!) until the June 14th release launch of Lost & Finders from UnWrecked Press, I wanted to share the last section of chapter 1.

Just a reminder that the ebook version is available for pre-order from Amazon, and the trade paperback will be available very soon. Later this year the audiobook version should be out as well, which is awesome news!

If you want to read the first book in the series, Finders, Inc., you might be able to snag it for free as an ebook in the next few weeks over at Amazon (or heck, just buy it for $4.99!).

Here are links to the earlier sections of chapter 1 to get you up to speed: part 1, part 2.

Let’s go back to our big fella Bim, who just caught an old-fashioned black key thrown to him by his old friend Hank (aka Hanky J), and Bim slips into someone else’s head… Enjoy!

The bus nearly shook itself apart as it came down the mountain pass. The brakes whined and the wheels rumbled over potholes and ruts in the asphalt. She shielded her eyes from the sudden burst of light through her window, and she gripped the back of the seat in front of her. She’d been riding this bus all day, but it wouldn’t be for much longer.

They never paid attention to buses anymore. Trains used to be the best mode of escaping them, but more people seemed to be riding trains lately. Nobody wanted to ride on a bus in America anymore.

The bus made it down the steep part of the mountain, and the highway leveled off. She looked outside at the gray mining town flickering past the rocking bus. A gray cinderblock post office. A dingy Speedway gas station with half the pumps covered in plastic bags, cardboard covering two broken windows. A trio of used car and truck dealerships, all adjacent, all on her side of the bus. Then they were through that town and charging past dark gouges in the mountains where decades ago they’d drilled and dynamited this opening in the cold black rock.

The bus began to shudder down another descent while she checked on her fellow travelers. The older black couple two seats ahead and across the aisle from her hadn’t moved a bit, their gray heads touching as they napped. A white mother and her young boy of maybe five, maybe ten years, gazed out the window three seats behind her.

And the Hispanic-looking woman with the long black hair was still in the very last seat, arms crossed, staring up at the ceiling. She was muscular and severe-looking, like she’d been carved out of the rocks of the mountains around them, but she wore a bemused smile on her face. As if all of this was just a lark, a silly way to pass some time before the next big thing occurred.

She turned away from the woman and sat back, catching her breath, pulse pounding. Her hand went to the wallet filled with cash and credit cards that she’d zipped into her vest pocket. Still there.

Fighting the urge to pull out her phone and check the time, or to calculate the distance to the next mountain town, or to maybe even access to the unending stream of text messages and voicemails that kept right on coming to her, she closed her eyes and thought about the other small cities and sleepy towns she’d been forced to leave. Fourteen years, almost a dozen places. Never long enough to leave a trail or put down roots. The thought made her feel lonely and tired. Incredibly tired.

When she opened her eyes again, the Hispanic woman was sitting in the seat next to her.