In my work the past year and a half with learning digital books and creating ebooks, one aspect of the process that I haven’t focused on enough has been the books themselves. I want to remedy that now, with a series of Novel Launches.

Each month, I’m going to “officially” launch a novel from UnWrecked Press with a special, low, month-long price on the ebook and trade paperback version. I’ll also try to share interesting tidbits about each novel and what I was trying to accomplish while I was writing the book. 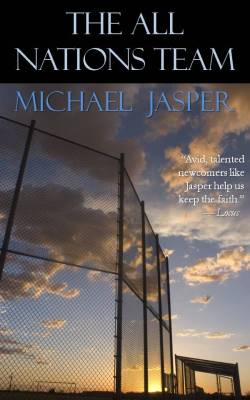 For November, with the 2011 World Series just a few days behind us, I wanted to launch my historical, slightly supernatural baseball novel The All Nations Team.

You can also get the trade paperback version for just $10.95 from Amazon and CreateSpace.

So why should you take a chance on The All Nations Team?

Because at its heart, it’s a story about not just a baseball team, but humanity. How all our differences don’t so much separate us but bring us together, even if it’s to simply win a baseball game or — at the other end of the spectrum — to survive a potential riot.

Also, it has one of the most malevolent ghosts I’ve ever seen. Tip: it’s the former head coach, and our protagonist George has just replaced him. The ghost ain’t happy.

About half of the characters in the novel are real people. I’ll leave it to you and Google to figure out who’s fictional and who’s real, but rest assured that the strangest players on the team are my creation. Not sure if I should be proud of that or not… Oh, who am I kidding, I’m very proud of their weirdness!

And I’m proud of this quirky novel about segregation, integration, baseball, and the world of almost 100 years ago. I hope you enjoy reading it as much as I enjoyed writing it.

Thanks, as always, for stopping by.