UPDATE: Now that the free week is over, you can read the rest of this story by downloading an ebook at Amazon and Smashwords. Then you can read it on your laptop, desktop, Kindle, iPad, Nook, iPhone, or whatever device you use to read ebooks.

This story was first published at Strange Horizons in July 2001, and was reprinted in The Best of Strange Horizons, October 2004 and my collection Gunning for the Buddha. It’s also part of my novel The Wannoshay Cycle.

Of course everyone blames the aliens. But they were working right up until ten minutes before the blast, that’s what really bothers me, and that’s what makes me think it was all just bad timing. Bad timing for Janna and me, too, when I stop and think about it. We’d be long gone from here if it hadn’t been for the Wannoshay. Now I’m out of work, we’ve moved everything out of our apartment once again, and the investigators are asking me what I know. 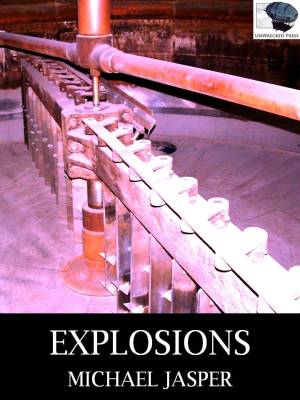 What I know is this: the Wannoshay had been here only eight months when the brewery blew up. They’d crashed to Earth – “fell out of the winter sky” was how the anchors on the Netstream described it – in the middle of a late-October snowstorm. One of their three dozen ships had landed just a mile outside Milwaukee. I had trouble believing that aliens were actually here, in our city, but work kept me too busy to worry about them, until that day in May.

So it was a surprise to me when Angie, our supervisor, told us the Wannoshay were coming to the brewery to work, loading and unloading the casks in refrigeration. It was all part of the integration process, Angie had said. “The mayor wants to show everyone how open and welcoming the people of Milwaukee can be. I think he just wants to earn brownie points with the Wantas so he can check out what’s left of their spaceship outside the city.”

I knew Roberta was going to throw a fit when she heard that the aliens would be starting the following Monday. Roberta was ten years older than me, but she looked closer to fifty than forty. Someone told me her Bible-thumping husband had shot himself after the aliens first landed, convinced the world was coming to an end. Roberta hadn’t been the same since.

As for me, I planned to be down south when I was her age, relaxing in a prefab house close to the beach with my daughter Janna. I’d ‘loaded a program about Myrtle Beach off a neighbor’s Netstream, and five seconds into the program I decided I wanted to smell salt in the air instead of burnt barley and factory smoke. I imagined Janna’s future boyfriends banging on our flimsy door and calling all the time, with the sound of the ocean in the background.

“Terri,” someone said next to me. “Terri.” I jerked my head up and blinked. Brown bottles were backed up behind my sorter like bugs outside a screen door.

Angie stood next to me, holding an inspection keypad and a stamp gun. “I need you to inspect the last shipment for me again,” she said. “Some of the bottles haven’t been sealed right, and they’re getting skunked. You up to it?”

“Sure,” I said, my face hot. I’d been thinking of spaceships falling from the sky like fireflies, hitting the sandy beach outside our Myrtle Beach dream home with sounds like gunshots.

Angie nodded and walked off, disappearing behind a pallet of twelve-pack boxes.

“Wantas are coming to get you, dreamer,” Roberta’s voice called out. “Better start paying attention, or they’ll steal your job, too.”

The racket of bottles sliding along the conveyor, on their way upstairs to shipping, drowned out what I was about to say back to her. It wasn’t going to be a friendly response.

I walked along the line, clicking a stamp on an occasional bottle with a crooked cap or a broken seal, pulling them off the line. Sweat dripped into my eyes from the heat of the machines. After a few minutes my mind began to wander again, but instead of thinking about the beach, I found myself thinking about the Wannoshay.

Ever since they came here – “made planetfall,” the Netstream anchor’s voice blared inside my head – they’ve caused nothing but trouble. Janna and I, along with all our neighbors, had to leave our apartment complex in January when the landlord raised the rent too high for any of us to afford. Then, after we’d all moved out or got evicted, he cut a deal with a businessman who started renting it out at lower rates to the aliens, hoping to get some free publicity.

A bottle, broken off at the neck, rattled down the line toward me, and I nearly cut myself on it. “Pay attention, dreamer,” I whispered to myself, as the bottles kept coming, never stopping. I clicked the stamp again and again, tallying up the rejects. Each day here on the line was another day closer to leaving Milwaukee behind, forever. Aliens or no aliens.

Read the rest of the story as an ebook from Amazon and Smashwords.

Check out my SF novel The Wannoshay Cycle, in hardcover, trade paperback, or ebook for more of the “Wantas” and the humans who come to meet them after this story takes place…