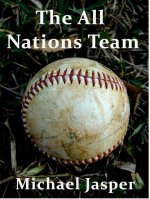 In honor of today’s date — 9/9 — I’m releasing the digital-only version of my historical baseball novel, The All Nations Team.

(Nine innings in a baseball game, see? And today’s the ninth? I know, it’s weak, but hey…)

Here’s a quick synopsis of the plot:

In his first season as head coach of the All Nations team, former slave George Grunion must contend with racist crowds, flagging team morale, his own loneliness, and even the ghost of the previous head coach. His players are now the only family he has left, ever since his wife left him three decades ago.

And if George can’t hold the All Nations together, he loses more than his job and his team. He’ll miss his chance to fulfill the prophecy made by his prescient centerfielder Mack — that George will be reunited with his estranged family before the 1918 season ends. If George doesn’t score this final run, he loses everything.

Interested? Feel free to read an excerpt from the opening chapter right here on my site. And if you’re hungry for more, you can download an ebook version from one of the following sites:

SPECIAL OFFER: For a short time, you can get the novel for FREE. Email me or check out my Twitter feed for the five-letter secret code for one of the versions at Smashwords. Special offer ends in a week (9/16).

I hope you snag an ebook version and read the novel. Let me know what you think! It’s a fun read, and not just for baseball fans. It has family drama, a cross-country adventure, and a somewhat accurate recreation of an actual team of mixed-race players in the years before our country lost its innocence in the first world war.

It also has ghosts. Need I say more?

3 thoughts on “Digital Book Release: THE ALL NATIONS TEAM”