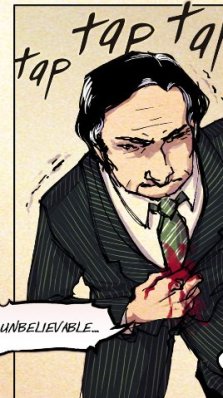 If you like getting the behind-the-scenes info about a favorite book, comic, or movie, then this weekly series I’ll be doing will be right up your alley. Think of it as the commentary track on a DVD you just watched and enjoyed and didn’t want to end.

What I want to comment on are the new pages of IN MAPS & LEGENDS, pages 9 through 12.

As this was my first foray into writing the script for a comic, hopefully you new writers will find some interesting tidbits in here. But most of all, fans of the ongoing series will get some extra hints about the plot, characters, maps, and more.

So here goes! (In the future, I’ll do just one page a week, but I’m playing catch-up today.)

I love the abrupt shift in setting on this page — we go from the smoky, polluted world behind Bartamus on page 8 to this lush green mountainside. And we have a new character. Close readers can probably guess his identity, but for now I’m keeping my mouth shut.

Favorite image: I really love the angle of the fourth panel, where our fellow is tapping on one of those weird black and red rocks. His walking stick in this panel makes me think of a wizard’s staff… But that’s all I gotta say about that.

Insider knowledge: All of the places listed in the third panel are real, but Reginald’s Peak is not. (Also, my original name for the mountain was Reginald’s Knob, which some people thought sounded a bit too… dirty.)

I think the inspiration for the first two panels here came from hiking in the mountains of North Carolina with my wife, who is a snake magnet. She passed within half a foot of a coiled-up snake that was easily three feet long as we were out in the wild on a hike that ended up lasting a few hours longer than we hoped. The thought of two squirrel-like critters biting at my ankles while I’m up so high creeps me out.

Favorite image: Niki did an amazing job with the unfurling bridge on this page. You can almost hear it unfolding in front of our old fellow, landing with a thump at his feet.

Insider knowledge: Speaking of sounds, keep an eye out for when you hear specific sounds (we call them “SFX” in the biz, short for sound effects). The Boom-Biddy-Bom SFX seem to happen at key moments…

We’re back to Kait and Bartamus at last, with Jeremy in the background. Yay! And I love how pissed she is, and understandably so — this guy just comes out of nowhere and busts into her place. Good thing she’s got that knife, eh?

Favorite image: I love the angry look on Kait’s face in the second panel, and the blank look on Jeremy’s face next to her (and the guy still won’t let go of his man-purse!). If you look closely, the map on Kait’s wall is the same as the map on this lovely image Niki created, which I think is pretty awesome.

Insider knowledge: Kait’s grandfather taught her how to defend herself. Seems like he knew his stuff…

We introduce a new character, and with a bang, not a whimper! This is LaVonne, who is Kait’s neighbor from down the hall. Can you blame her for diving into the fray when she sees her friend’s door wide open and hear her shouting at some strange man? A man who, apparently, has some strange powers.

Favorite image: Take a close look at panel four — the one where Bartamus and LaVonne “collide.” Something very mysterious going on there with Bartamus, down on one knee. Check out that red glow around them, too.

(The image of LaVonne on the floor, still clutching her shoe, sorta makes me chuckle, too, I’m ashamed to admit. Chuckle and wince in sympathetic pain at the same time.)

Insider knowledge: LaVonne was a dance major in college, and she’s been trying to get work in that field since graduating a few years ago. Her dance skills aren’t of much use so far in this scene, unfortunately. Here’s hoping she has a chance to pay Bartamus back, later…