Okay, I admit, I’m new to this whole writing comics thing. So last summer, when artist Niki Smith and I decided to dive into this whole webcomics thing with IN MAPS & LEGENDS, I had to do some fast cramming.

I needed to learn how to write a comics script. Not so much how to describe how and what to put in each panel, but the proper format. So I did my research (aka googling). Found lots of how-tos and sample scripts.

And, of course, I got my trade paperback of Neil Gaiman’s Dream Country, which has the entire script of the Sandman story “Calliope” in the back. I know that was the first comic script I’d ever seen, many moons ago.

Turns out there’s no real set-in-stone format. And ultimately, a script is a conversation between writer and artist (a conversation that the editor eventually will eavesdrop on).

As a writer, it’s pretty fun, once the process is rolling. You can see your words turned into lovely art, dialog balloons, color, and more.

Close-up of an X-Acto knife pointed at wall (can’t see details of wall yet, just vague smudges); light glinting off tip, though the room is full of shadows from the little lamp on the floor next to Kait. Show Kait’s dust-coated hand holding the knife, with a cool ring on one finger?

Which through a series of pencils, inks, colors, and other artistic magic, becomes this: 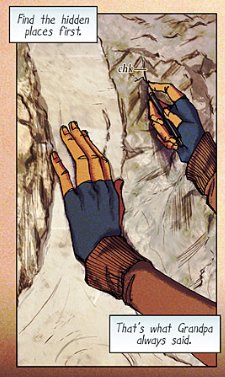 So as we start counting down the days until MAPS gets its official launch and we can share page 9 with you, with more pages coming out each week, I thought I’d let any aspiring comics writers take a peek at my script for the first 8 pages of the comic:

Enjoy! And let me know how you’re doing on YOUR comic. Share a link, too, if it’s online.