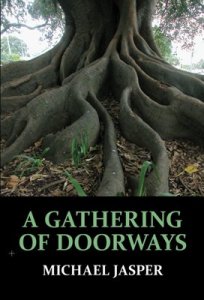 After over a year of waiting since its acceptance (which is really a pretty short time in publishing) and over three months late (which is an eternity for this poor author!), my “rural fantasy” novel A Gathering of Doorways is officially for sale.

You can buy it at Amazon.com, even! Or Barnes and Noble.

Hopefully it’ll be available in stores near you as well, but with the way things are shaking out with distribution and the ol’ economy, Amazon or your favorite online store may be your best bet… (Stupid just-about-to-go-outta-business Borders!)

This book is more of a horror novel than a fantasy novel, but it has some key elements of the kind of books I like best — a quest (three of them, actually, one for each of my main characters), a mystery, quirky side characters, strange other worlds, nightmarish creatures, and a general sense of weirdness, with my regular-joe protagonists fighting to make sense of it all.

Oh, and it also has a dragon.

Here’s a snippet of what Booklist had to say about the book:

In his third novel, speculative-fiction rising star Jasper offers a finely nuanced blend of fantasy and horror centering on a salesman turned organic farmer who confronts an unusual terror in the woods surrounding his land. Gil and his wife, Melissa, are already facing some serious disillusionment about their quixotic move to the country when their son Noah disappears into the forest under Gil’s watch.

I’m not gonna argue with anyone who calls me a rising star. Yay! Now if we can just get Amazon to update the book’s page with cover art and new reviews other than the ugly PW review…

5 thoughts on “A GATHERING OF DOORWAYS now available (at Amazon, at least)!”